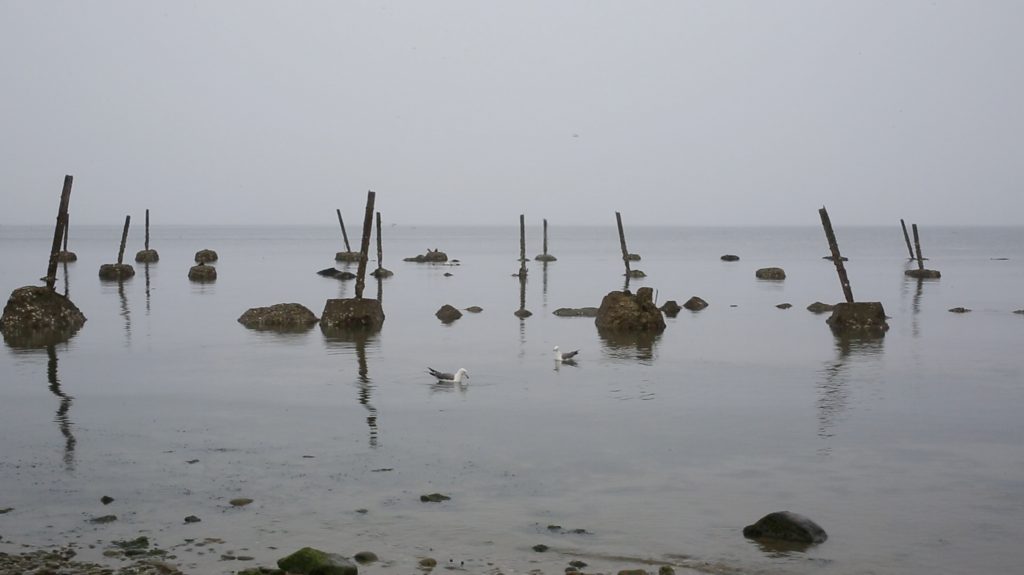 ”How long
Do works endure? As long
As they are not completed.
Since as long as they demand effort
They do not decay. ”
Bertolt Brecht

More than two months have passed since some of us arrived in Stockholm. Despite geographical, cultural and other idiosyncrasies, some affinities of our different research backgrounds have become apparent since we first met in the IASPIS kitchen. The many conversations, film screenings, parties, dinners, concerts, museum visits, boat trips, the sharing of music and excursions to the swimming pool, have allowed us to inhabit in a better way the space we are in now.

There is a common point worth noting: most of us were born during the Cold War and felt its temperature more or less intensely. Perhaps, because we experienced this historical period, we learned, that borders are not fixed entities, but designs of an epoch. That even solid, heavy industrial poles can simply relocate in search of cheaper labour, leaving behind tons of waste, relegating entire cities and populations to a state of almost complete abandonment. It is not by chance that borders, ruins, detritus from industries and buildings, fields of raw material extraction, accelerated obsolescence of objects and professions, economic monopolies, subjection, control, and annihilation of historically oppressed bodies, are themes running through the works presented here. All these problems have become ever more evident, in their recurring presence, after the fall of the Berlin Wall and subsequent global domination of neoliberalism. As artists, we try to remain vigilant, having not lost our capacity to be haunted in front of it.

Almost all of us have seen the supposed end of the Cold War, Latin American dictatorships, and other authoritarian regimes promoted by the United States of America in its crusade against communism. Like ruins, authoritarianism did not disappear and even today fragments of the wall dividing Germany are sold on eBay and Amazon, which, in turn, work as a good metaphor for the new face of global capitalism in its financialized and technocratic version, insofar as it takes or wants to take possession of people from the inside (the word souvenir is handy in this case). It is against this fetishization and commodification of memory, the taking over of subjectivity that the artist’s hand brushes over the paper to draw the closing moments where bodies succumb to police violence, to wars, to states. Insisting on such scenes forces us to gaze at (and to remember) the countless bodies that were and are sacrificed as fuel to feed the capitalist machine.

If capitalism, like a snake, needs to shed its skin from time to time to grow and fatten, we are the ones who look for the dead tissues it leaves behind. Slack, diaphanous, and torn, these skins indicate a double presence, both of the past and the future. It is a warning not to forget that the bodies once covered by them are now protected by a surface more suited to their size, more resistant, and more falsely transparent. For me, the works exhibited here are like these skins: the sign of something that has been displaced into surrounding space, leaving a trace, a presence in what is to come.

Scraps of ceramics, aged photographic papers, old images extracted from archives, unfinished constructions, old maps, board games, youth… For Walter Benjamin, the era of the technological reproducibility of the image corresponds to the moment where things lose their cult value, but not absolutely. For Benjamin, photographs of the faces of our loved ones, dead or missing, are the last refuge of the ‘aura’. These portraits are not themselves the objects of our love, but of what we reencounter through them. Like portraits and the serpent’s skins, the objects are portals.

And what about these faces? Where can they be found in this exhibition? Inside boxes of aged photosensitive paper, that time has turned completely grey? In the vision of empty borders with their bridges and defence devices whose names seem taken from a fantastic tale? In the letters, we send to ourselves? In the hands that operate, at a distance, machines digging the earth to extract clay? Submerged in the serene waters of the sea, on the third bank of the river*, or in the gaze, voice and gestures of children whose infancy was marked by the experience of war? In the delicate work of painting, porcelain carried out in the midst of ruins, between cigarettes? The faces in this exhibition are everywhere, everything here is the serpent’s skin, vestiges much like the photographs of loved ones, which carry with them our present only because they give colour, in a double movement, to the past and to the future.

Each of the works on display appears as a blow and absence that has escaped official history, detached itself from a kind of world that has done its best to forge a state of general indifference: to otherness, death, and anything that lies beyond the established boundaries. Firstly, let us recall what is meant by indifference, as both apathy and a lack of receptivity to the other. The other as an eternally foreign category which threatens the stability of conventions and egos, of politics, of beliefs, of the boundaries that divide cities, neighbourhoods and people. The self-seen as other, The Other Selves, because to belong to this world of indifference one cannot but look at death, to the ‘wear and tear’ of bodies themselves, without losing oneself, without putting oneself outside one’s own ‘self’. In this tedious world, old age will never be understood and celebrated as the opening of multiple futures, but only, irremediably, as the loss of one single past, that of youth. To condemn the people to eternal youth is thus to deprive them of a future.

Ah, the limits… of bodies, of mentalities, of territories, of the conventions that regulate different times and spaces. They are all at once imaginary and brutally real lines, drawn and guarded by the sort of inexhaustible effort present in the apparent and artificial stillness of borders, ICUs, psychiatric hospitals, and prisons. To maintain this monotony requires a gigantic workforce, a proliferation of surveillance mechanisms, massive quantities of resources, violence, apathy, and amnesia. All this effort requires an extra force that operates in the extra fields of official representations. It is precisely in this direction that this exposition is pointing to a space outside of the frame. And this negative space is seen through the intervals between one photograph and another, not always candid, of women involved in sewing activities, over the thousands of candles and cigarettes lit by Swedish matches, or by the unmeasured resources and expectations contained in the process of obtaining a small and disappointing pile of clay. At least, not only brutality can be felt by its negative space, but also love: the longing, the absence, the memory of the last look, the last breath, the last touch before the body goes cold.

Remember the serpent’s skins? They condense different times: they are images of the future as negative space, surfaces that shaped a presence, a body, and cut open to make room for the future. Negative space is not a concrete and closed mould, it has neither outside nor inside, it is the inside out, torn skin. It is the clothes that no longer fit us and brings with it a warning. For this reason, perhaps anachronistically, we continue to cross bridges backwards, to strive stubbornly to find new ways of generating poetry. It is what justifies our being together in this small space, giving us the necessary courage to contemplate the dragon’s gaping teeth with the joy to continue dancing, to trace hot planes over obsolete maps and to speak – far away from armies – the silent language of forms, of images, and of bodies. This is our effort.

ID:I Galleri is an artist run gallery that started in 2002. The gallery is run collectively by 27 professional artists, each with a their own artistic approach, united by the idea that we are not primarily running a commercial gallery but first and foremost we constitute an artist run, experimental gallery space. ID:I Galleri