Welcome to a screening presented by Barthelemy Garcia, currently artist in residence at IASPIS, in collaboration with filmmakers Kim Ekberg, Tuva Björk and Neil Wigardt. The screening is followed by a conversation between the artists, moderated by writer Kevin Breathnach.

TUVA BJÖRK
Fear Fokol (Documentary, work in progress extract, 21 min, 2021-2022. Language: English, Subtitles: English).
A short documentary following the private security companies,  with observational footage of security guards in training and at work, interviews, and extracts from Franz Kafka’s The Burrow read in voiceover. The film is a meditation on the illusion of security in a fragile climate of inequality, fear and masculinity in crisis.

NEIL WIGARDT
Foton dagboken (Experimental, 5 min, 2022).
Neil will be showing parts of an ongoing work about digital cinema. The Photon Diary is composed by some different digital noises, from different cameras. The result is an abstract moving stereogram that our pattern-seeking brain tries to make sense of. 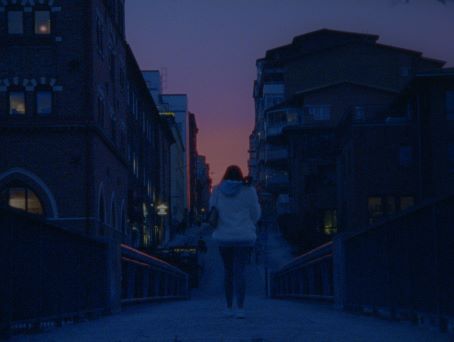 Kevin Breathnach (*1987) is the author of Tunnel Vision (Faber, 2019) and Morphing (The Lifeboat, 2020). His writing has appeared in The Tangerine, the Dublin Review, the London Review of Books, Winter Papers, and elsewhere. New work is forthcoming in Poetry Review.

Tuva Björk (*1994) is a hybrid filmmaker from Helsinki, Finland. She holds a BFA in Fine Arts and an MFA in Film Directing both from Valand Academy of Art. She attended the residency program – at Bag Factory Gallery in Johannesburg, supported by Iaspis, Konstnärsnämnden. Tuva is currently working as a director for two feature length hybrid films: Laws of the Wild, in collaboration with Sally Jacobson and produced by Story AB, and in the bloom of dying amber, in collaboration with Natacha April Souyris, produced by MDEMC.

Kim Ekberg (*1989) is born in Krokek and lives and works in Starrnäset and Bredäng.Director, visual artist and film critic, he works with obsolete techniques,and is one of the founders of the Stockholm Analogue Film Co-op.

Neil Wigardt (*1990) lives and works in Stockholm. He graduated in film studies from Academy Valand in 2016. He is currently working on several documentary features as an editor. As a director he is working on his first feature film titled Blomster.

Barthélémy Garcia (*1985) is a French-born artist from Pertuis who has been based in the Swedish city of Gothenburg since 2011. Garcia addresses life through — often mundane — materials and objects. During his time at Valand Academy he developed a mild obsession with a radiator, subsequently expanding to AC’s, cell towers, artificial grass, roofs and supermarkets. His work is intellectually inspired, carried out intuitively, and, more often than not, includes misplaced academic quotes.

Barthélémy Garcia studied his BFA and MFA in Photography at Valand Academy after having studied Art history and Archeology in Aix-en-Provence.