IASPIS Kitchen Talk CPR 2022: Back to the North!

to lm@iaspis.se before 30th May

Welcome to a presentation of the CPR 2022: Curatorial Research in the Nordics: Back to the North programme at IASPIS.

The programme invites six international curators to Helsinki, Stockholm, Skåne and Copenhagen in May/June 2022. The program is organized together with local hosts and has the main purpose of introducing the visiting curators to the art scenes of each locality.

Join the curators and organisers at the talk at IASPIS on June 1. Carmen Ferreyra, Founding Director of CPR, will introduce the programme and Marie-Nour Hechaime will talk about her work as a Beirut based curator and the relevance of researching the Baltic/Nordic art scene(s) while Mwape Mumbi will talk about his curatorial work in Zambia and beyond. 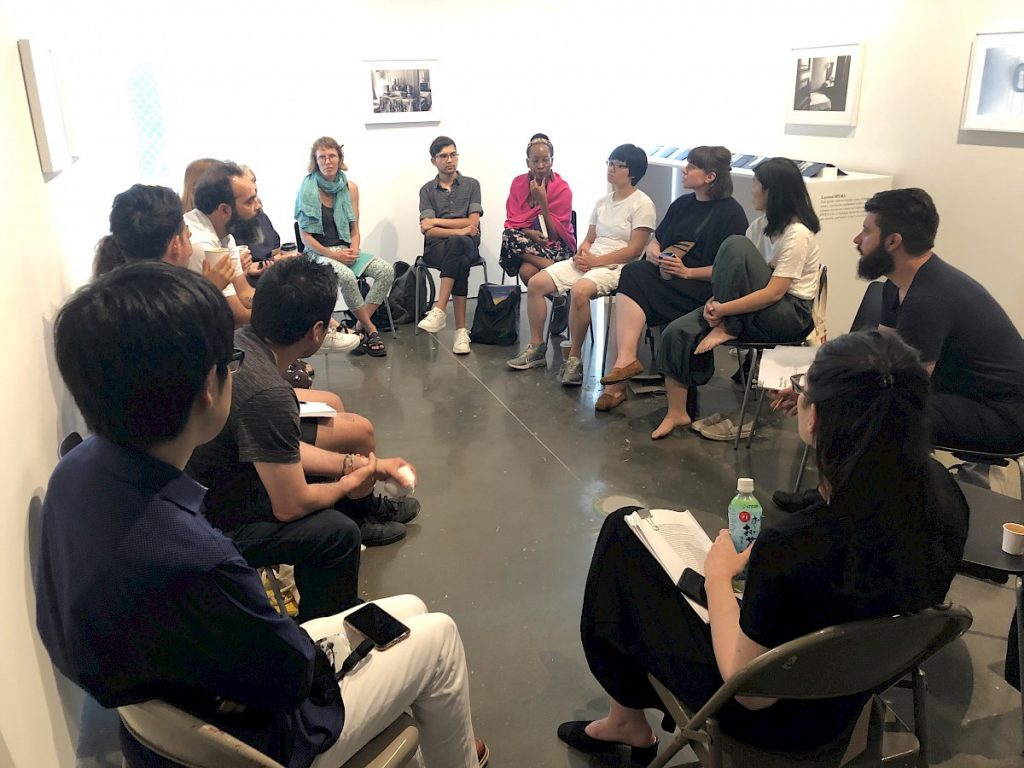 Carmen Ferreyra is an independent curator and art producer based in Brooklyn, NY. She completed her MA in Critical and Curatorial Studies in Modern Art at Columbia University in 2013, and in 2010 earned a BA in Art History and French also from Columbia University. Since February 2015, Ferreyra is the Director and Founder of the Curatorial Program for Research (CPR), a non-profit organization with offices in Brooklyn (US) and Copenhagen (Denmark). Ferreyra is currently lecturer of Contemporary Latin American Art at the School of Visual Arts, was Special Projects Coordinator at The Armory Show in New York (2019), Director of Special Programs for the Bienal de las Fronteras in Matamoros, Mexico (2014-2015), and the Director of UNTITLED. Art Fair in Miami Beach, Florida (2014). She was the manager of Pinta Art Show in London and New York (2007-2013) and acquisition advisor for Mundus Novus Latin American Art Collection (2010-2013). Additionally, she served as editor at Interventions, Columbia University Curatorial Journal from 2012-2013, and in those two years she co-organized two symposia: Homeland Security: Borders and the Global Contemporary, about contemporary art and globalization, and Calle Tomada, about the role of the street in contemporary Latin American art. Ferreyra has conducted research for several institutions, including the Study Center at the Museu d’Art Contemporani de Barcelona, the Solomon R. Guggenheim Museum in New York, the Whitney Museum of American Art, El Museo del Barrio and the Colección Patricia Phelps de Cisneros in New York, between others. She was guest lecturer on Curatorial Practice at Pratt Institute. As Director of CPR, Ferreyra has designed, produced and supervised eight research residencies with 70+ fully funded curatorial and artistic fellowships in 28 cities around the world.

A Zambian national, Mwape J. Mumbi is an emerging curator, multi-media creative, a proponent for an assertive African visual culture with interest in the development question and its discourses, an arts critic and researcher in African natural and cultural heritage by travel and free-study. His independent curatorial practice includes exploration of (indigenous) knowledge production in collaboration with creatives in animation/video/film, architecture and design, visual and performance art in group or individual exhibition or production.

Mwape intends for his work to be socially engaged projects with an aim at showing the critical role of arts and culture in human and community development pursuits. In January 2019, he was an International Participant in the (Un-)Learning Place Project at Haus der Kulturen der Welt (HKW), in Berlin, Germany, a temporary space set up for gathering, discussion and workshops. The unique (Un-)Learning Place is part of HKW’s newlong-term project Das Neue Alphabet (DNA) for curatorial, artistic, or activist strategies in close collaborationwith self-organized research collectives and independent artists and curators.

Curatorial Program for Research (CPR) provides in depth, custom-oriented research directed by local CPR hosts. Each programme lasts for up to six days per city, and encompasses three to five cities. Merging academia with on-site research, CPR’s local hosts welcome the groups with an intensive programme that includes readings and classes about local history, arts and culture, studio visits as well as visits to local art institutions. Previous editions of CPR have taken place in South America, Mexico and various parts of Europe.

Marie-Nour Hechaime is an art organizer currently working as a curator at the Nicolas Sursock Museum in Beirut since 2020 where she is in charge of the Public Program. She previously worked with several non-profit arts institutions including Mophradat (Brussels), Council (Paris) and La Colonie (Paris), and from 2013 to 2016 at Ashkal Alwan (Beirut). Her interests and background have led her to invest in projects and productions at the intersection of arts, activism and societal issues that strive to articulate and exercise points of interrelation between disciplines, as well as alternative modes of generating knowledge and collaboration. In 2017-18, she participated in the Experimental Program in Arts and Politics (SPEAP) founded by Bruno Latour. She has been part of Arts Collaboratory since 2014, a self-organized, horizontal ecosystem of twenty-five socially-engaged arts institutions.